Communications skills are severely underrated in the business world. So says David Ehgbali, and he's out to prove it, too. Today you see more and more companies looking for technical skills and specialized workers, especially in the tech industry. In fact, that sector's emphasis on programming, math, and STEM in general has inspired a major shift in hiring. David Eghbali contends that this has created an under-appreciation of soft skills, especially communication. He believes that anyone can teach themselves how to be a better business communicator and make themselves a more attractive prospect. These tips apply to anything from a quick conversation with a peer to a pitch to a boss to a major presentation, and they work just as well for emails. 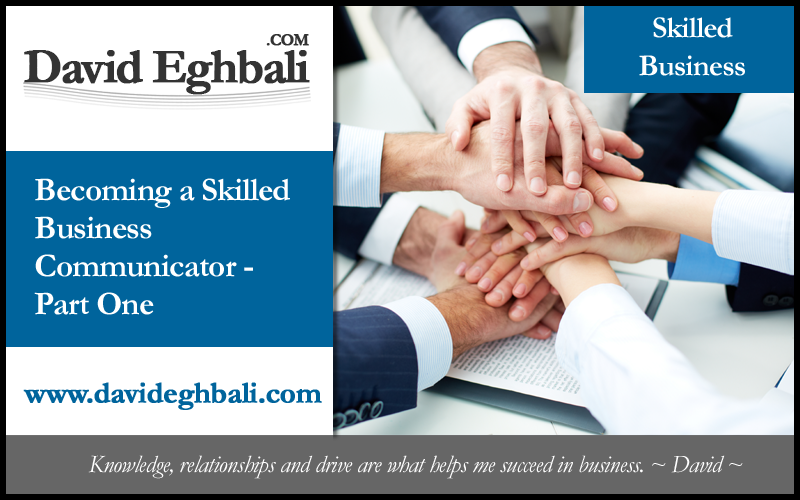 #LeadWithTheStory
The first thing you need to learn, according to David Eghbali, is to communicate the way journalists do in terms of structure. That means starting out with the most important single idea that you want to convey. Journalists call this the pyramid style, because your communication takes the form of an upside-down pyramid: the biggest news is on top and there are supporting arguments and facts below it, holding it up. You might also recall this form with the instructions your schoolteachers gave you: write about who, what, when, where, and why. That all means the same thing: whatever the single most important takeaway of your communication is needs to be the first thing that the audience hears or sees. The beginning of your interaction is when the audience is paying the most attention, so it is your best opportunity to make an impression. It is always tempting to try to start out with some background and context, but you need to minimize that as much as possible, because it's going to give the audience the impression that you are slow to get to the point. It is better to lead with your most important thought, support that, and repeats the idea later on to reinforce it. David Eghbali advises you to try reading well-known journalists and pay attention to the structure of their work and the order in which they present information. It's front-loaded: the most crucial info is at the top.

#Brevity
David Eghbali thinks that workers in business can learn a lot from journalists, who are professional communicators. That extends to another idea: the value of brevity. Use as few words as possible to make your point. This is making the best use of time and space. It's a fact that the attention span of your audience is limited, whether they are listening to you speak or reading your emails. The longer you talk, the more likely it is that their attention will wander and they will lose focus. They will start to think about the other things they need to work on, or your words will lead them down another train of thought. In addition, more words is not necessarily better. For example, if you are piling on modifiers, your words actually become less convincing. Don't call the fourth quarter results "amazing, incredible numbers." Just say what the results were and then launch right into what made them good. Adverbs and adjectives often get in the way of meaning because they don't really add much to the meaning of your words, and if you rely on them too much, your audience will become suspicious that you are overcompensating. The more positive you try to be, the less your audience will believe you. Think about the last time you heard a commercial promise an amazing, once in a lifetime deal. Weren't you immediately dismissive? The same thing happens on a lesser scale when you are too verbose. Cut right to the point without wasting words.

#Engage
It's easy to slip into a groove and keep on talking, but you need to take some time to check in with your audience. David Eghbali believes that this is core to building a connection and rapport with the audience. Even if they have nothing they want to say, they will feel included in the conversation. Everyone has had the experience of being talked at by someone who was only interested in their own thoughts, and wouldn't listen to anyone else. That's a terrible attitude to project. Go out of your way to not only ask for questions and feedback, but also work in some interactivity. If you are in a presentation, ask questions of the audience and make sure someone answers them. This advice applies more to spoken communication than written communication, because media such as emails are inherently less interactive. You are forced to go back and forth just by design. The temptation is to keep talking because you feel the need to get your point across, but you will reinforce that point far better if you make sure the audience is engaged. An engaged audience is mentally alert and interested. This is especially important if you are making a presentation that takes more than fifteen or twenty minutes. If you are talking for more than that without doing anything to engage your listeners, David Eghbali warns that you are going to lose them. Remember, this is not just a transfer of ideas. It's an exercise in trust and empathy. You need to forge an emotional connection to your audience if you want them to take you and your ideas seriously. That entails making an effort to reach out and include them.